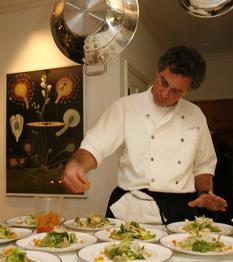 Dave Rubell is a Master Chef and gourmet caterer who has worked in virtually every aspect of the restaurant business since beginning his culinary journey at the age of 12 back in his hometown of Merrick, New York. Dave did his apprenticeship at The Greenbriar Inn in Boulder, CO which rose to Four Stars during his tenure there. From 1989-1995, he ran what was at the time one of the largest catering companies in Los Angeles, Ambrosia Catering. While serving as their Executive Chef, he produced food for the Academy Award's Governor’s Ball (pre Wolfgang Puck) as well as the post party for the Grammy Awards. While at Ambrosia, Dave branched out into the private chef world and began cooking for a number of A-List celebrities including 5 Years with Bruce Springsteen, Jimmy Iovine, Wayne Gretzky and Madonna.

In addition, he also cooked for a very special group of dignitaries -- five former United States Presidents (Nixon, Ford, Carter, Reagan, Bush Sr.), during the opening ceremony for the Nixon Library.  But one of Dave’s fondest memories is the dinner he prepared for the late Julia Child in celebration of her 75th birthday.

In terms of recent events and clients, they run the gamut from charitable organizations like the Annenberg Foundation and United Cerebral Palsy to entertainment industry and culinary-driven functions and, of course, A-list weddings and celebrations.

Whether it's a dinner party for 10 or 500, Dave's clients remain loyal because of the level of service, style and excellence that he delivers time and time again, not to mention his approachable demeanor and modest take on his vocation:  “I just play with food – what could be better than that?”